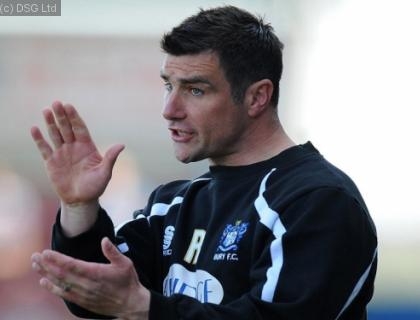 Kevin Blackwell's first home game as Bury manager ended in a 1-0 home defeat to Swindon as James Collins claimed the only goal of the game at Gigg Lane.

The striker's first league goal for Swindon came within the opening minute, giving Paolo Di Canio's side a lead they never relinquished.

It was a goal worthy of winning any game, Collins beating Bury goalkeeper Trevor Carson with a stunning 20-yard lob.

Bury rallied and were denied an equaliser by a superb challenge from Jay McEveley just as David Healy got ready to pull the trigger.

Despite applying a decent amount of pressure, Bury struggled to find a way through, Peter Sweeney lashing a long-range effort over the bar.

But Swindon, for the most part, controlled the second half and Collins wasted a chance for his second by blasting over from inside the box, while Carson produced a tremendous save to push away a stinging volley from Adam Rooney.